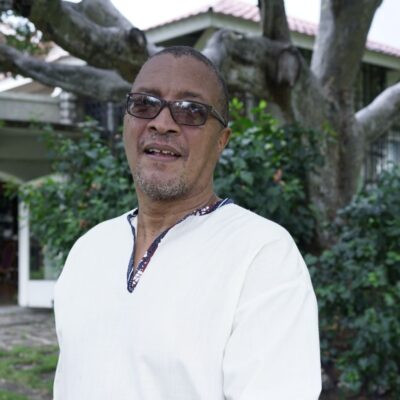 Mikie Bennett, dubbed the “Quincy Jones of Reggae,” began his career in the early 80s as a member of the group Home T 4. In 1986, under his direction, the reformed group – now named Home T – had its most successful period with hits like — “Don’t Throw It All Away,” “Who She Love,” “Pirates Anthem” and “Spreading Rumours” all massive reggae hits internationally

This period saw him working with two of the leading producers at both King Jammy’s and Music Works studios as a vocal arranger and staff writer. Songs like “Telephone Love,” “Rumours,” “Champion Lover” and numerous other hits for Dennis Brown, Gregory Isaacs, Cocoa Tea & Sugar Minott, brought him greater recognition. The demand for his services grew and in 1989 along with friend Patrick Lindsay formed Two Friends Ltd. a recording and management company.

Two Friends allowed Mikie total creative freedom and a chance to show case some young artists that had been under his wings. These included — Brian and Tony Gold and Chevelle Franklin. The sound was sought after both locally and internationally and soon the major labels came calling wanting their various artists to try the sound and what they saw as the perfect marriage between R&B and Reggae. Billboard hits like “HOUSECALL” with Maxi Priest and Shabba and “MR LOVER MAN,” served to improve his status in the music indusrty.

Today Mikie remains as timeless and relevant as ever with his work. He continues to build his repertoire as song writer as well as producer by working with the stalwarts in the music industry and his acclaim has not gone un-noticed by corporate Jamaica. His spans generations and today’s icons such as Tarrus Riley continue to benefit form his expertise. His work with young reggae crooner Natel, his recent involvement with Mr. Vegas’ album entitled “Sweet Jamaica” and Noddy Virtue’s album “Addiction” are a testimony to this “span” and his longevity. His obsession with the highest quality work provides a powerful attraction that facilitates the creme de la creme of musical genius. As such he has worked with Dean Fraser, Arturo Tappin, Gladstone Wright, Sly Dunbar, Robbie Shakespeare and many others. He wrote and produced the “Find the Flag in Your Heart” song for Jamaica’s 50th Anniversary Celebration. He continues to inspire and aspire. As Managing Director of Grafton Studios Mikie lends his talents and vast knowledge to many different projects and over the past few years Mikie Bennett has been very vocal individual especially on music related subjects. He has been named to every major private sector committee that speaks to music related issues. His position on developing programs to seek find and nurture young talents is well known in Jamaica and is reinforced by the many invitations to be a part of radio and television programmes on industry matters.

To widen the reach of the music industry in Jamaica and explain it relevance and importance Mikie initiated “Reasoning with Seasoning,” a town hall type session fostering discussions between members of the community and experts in various fields (lawyers, judges, medical doctors, musicians, community leaders and ministers of government). All this to show how our supposedly at risk youth can impact the world, with guidance, through our music and culture. Inner city youth are the intended beneficiaries, however, acclaimed presenters usially come away with non-steretypical perspectives.

Mikie was involved with the initiation and implementation of the The BYND (Beyond) programme for the Jamaica Business Development Centre (JBDC). His faciltity at Grafton Road provided a base for this as it did for the Grants Pen Programme for ‘youth at risk.’ Supported by

Song writers boot camp instructor for over 10 years (week end residential work shop), Master Class organiser with guitarist Ernie Ranglin, bass players Robbie Shakespeare and Val Douglas, in addition to be the founding musical director the Calabash Literary Festival only serve to inform of his total commitment to music and culture of the most powerful cultural state in the world.

Recently he accepted an assignment as Director of Culture for the FIWI Jamaica project at UTECH where he has been instrumental in providing a one year program dubbed Masters in Residence
This program provides coaching and tutorials in Song writing , Performance, Sound Engineering and Music Management
The program has over 45 young people being groomed for a place in the Jamaican music Industry
In 2017 he received the Jamaica Reggae Industry Association award for Mentorship